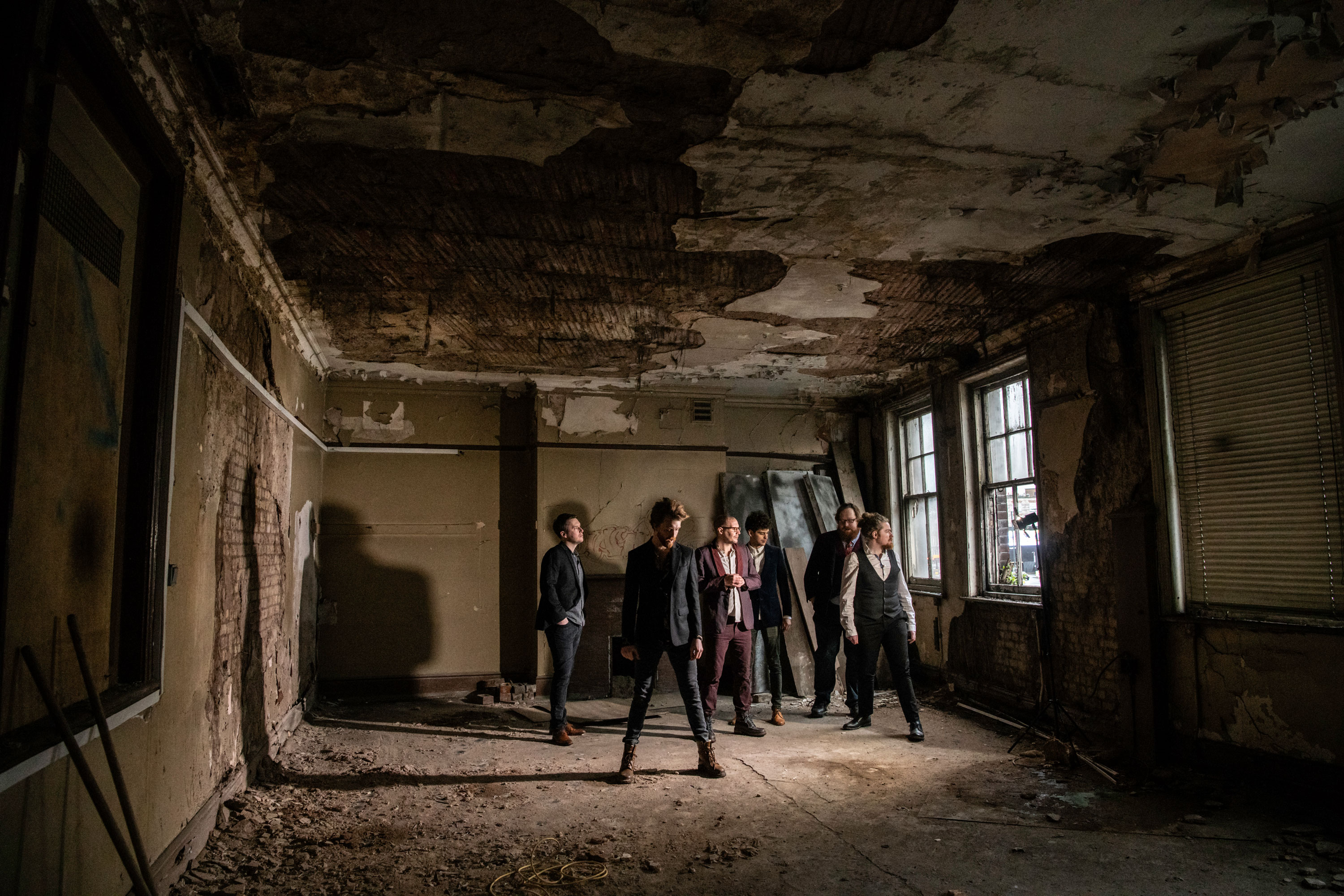 It is not simple to categorize Rum Buffalo, an 8-piece band that finds its sound by pushing the boundaries of what they can accomplish. Their songs unfurl like the evil twin of the bustling London metropolis that birthed them—vivid, energetic, and unpredictable.

Their forthcoming album, Bloodmoon, is their most ambitious work to date: tracked in ten days at a converted barn in the countryside of Wales, the record burns with the limitless creativity of the individuals who make up the project. A raucous horn section and fervid beats propel the songs forward, while a haunting, women-led chorus of almost mythical proportions cackles, sings, and shouts throughout the album. Led by the magnetic Jake Stevens, Rum Buffalo creates a landscape that knows no bounds, a quality that is mirrored in Stevens’ songwriting.

“It’s a whole sonic world, this realm we’re engrossed in. I feel like that when we play it live, [and felt like that] when we created it.” Stevens says. “I think it’s a comfortable and natural thing to do, to make a Rum Buffalo song about something otherworldly, because that’s what the music inspires.”

With charisma, Rum Buffalo invites their audiences to join them on a wild odyssey through their album, an experience that is undeniably inviting. It is perhaps this same reason that the band has been able to exist for as long as it has.

“It’s not easy to have a project in London; it’s so hectic and everything is happening.” Stevens says. “I feel very grateful that I grew up here and have this strong sense of family and bringing people together.” As the child of a single-parent home, Stevens cites his mother, who is also a musician and a songwriter, as having a large role in developing this sense of community that is so central to Rum Buffalo.

“The concept of family for me has always been my mum’s friends—the rocks around her. Growing up with that idea, my friends feel like family, they don’t feel like friends.”

The talents of the Rum Buffalo crew are on full display on the track Dark Mountain, which paints a reality that merges sci-fi with fiery pop-rock. The charismatic Stevens imbues his fantastical world with equal parts soul and grit as he spins the tale of a group of miners on a mountain working beneath the command of a malevolent duke. The story, bizarre as it is, is pure fun as it snares its audience in a groovy, punchy journey that begs for movement and otherworldly revelry. The arrangement befits the story: an ambitious blend of horns, guitars, and drums that delivers the song in phases—it is a story in and of itself. Stevens’ vocals are joined by a 13-person choir comprised of his favorite women vocalists, echoing the voices of the miners as they sing the final, haunting refrain: “We came at night / Rolling mountain side / These things break my soul / Digging deeper holes.”

The surreal aspect of the story is precisely where Stevens finds his inspiration: “I’ve been brought up with science fiction—it’s a big part of me. When you’re engrossed in sci-fi, it’s this endless realm around you and anything’s possible. That’s quite literally the same with writing music for this band.”

After touring internationally and making a name for themselves within the London underground music scene, Rum Buffalo crowd-funded 10,000 pounds to complete the recording of their debut record, Rum Buffalo. The record was produced by Ru Lemer, and engineered by Ru Lemer and Leon Marley Itzler at Giant Wafer Studios in Wales. It features Jake Stevens, James Wilson, Jake Chapman, Jamie Reibl, Rosie Turton, Harrison Cole, Felix Weldon, and Nuno Brito.